Tonight we celebrated Lyn’s Birthday with some sensational music, great company, excellent food and perhaps a glass or two among friends. 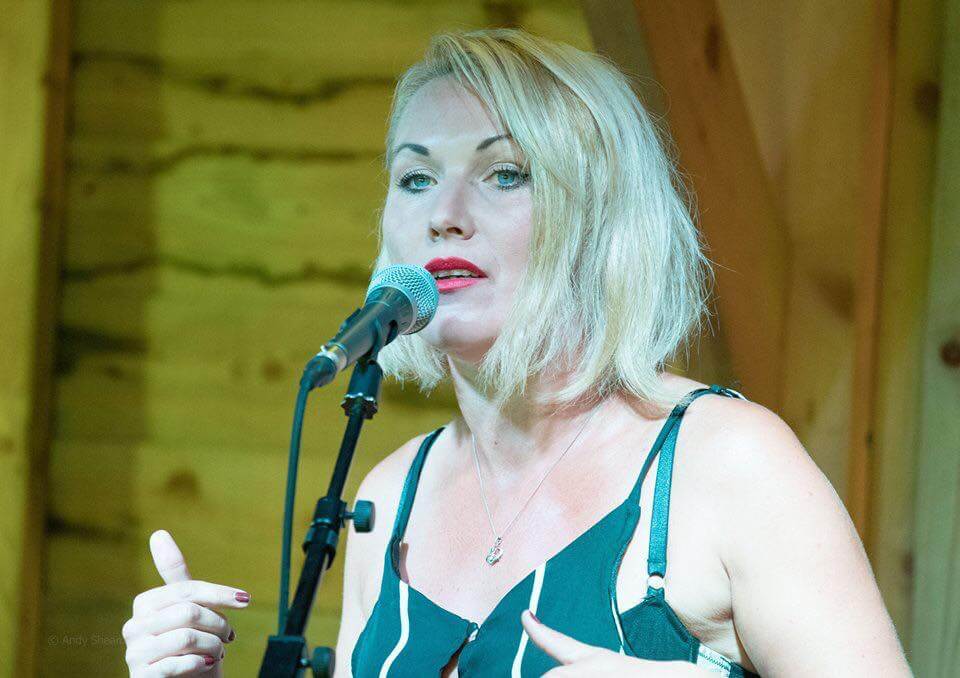 Nicole Silva opened the evening with a 15 minute set of original songs accompanied by Adam Churchill on his Gretch guitar. She has a day job of presenting Keep It Country on Sky TV and has recently started to follow her dream of singing so this was a great experience for her to perform to such an attentive crowd.

Next up we enjoyed an old LRB friend Annie Keating with her trio. Scott Warman on double bass and Steve Mayone on guitars and mandolin. “I’m not so old” Annie quips…. laughs.

Coney Island from the Album MAKE BELIEVING was the first song requested for Lyn on her birthday. I hope she heard it but she may have been out the back cooking at the time….

This brought back memories of the last time Annie played it here when accompanied by Trina Hamlin. You can still enjoy that performance on the LRB YouTube channel. A classic.

Just for today From FOR KEEPS was the next song. It’s about getting out of town and it just bowled along with Steve’s Mandolin cutting through the lovely bass rhythm. 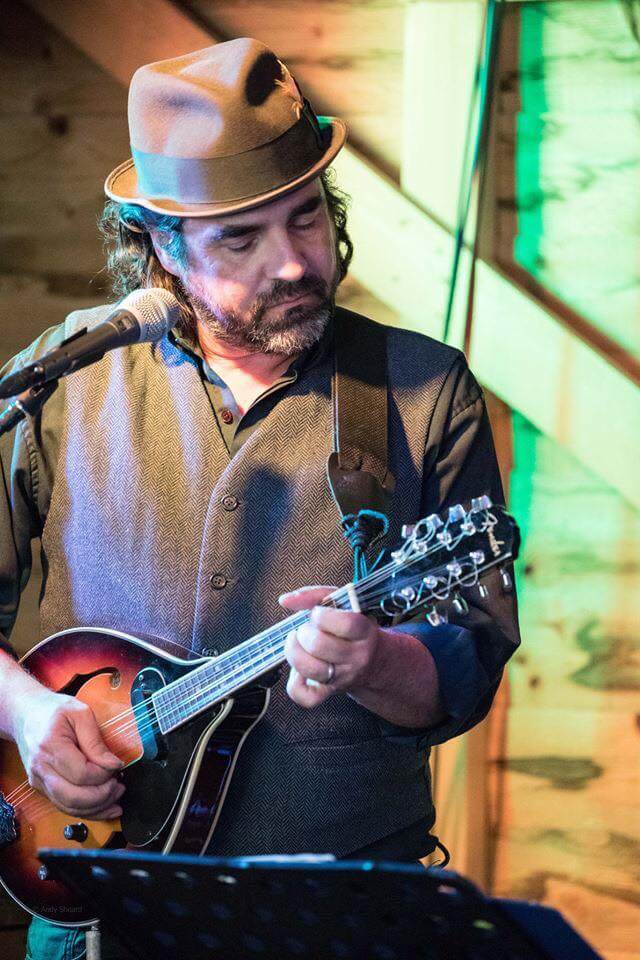 Cris on sound was gently teased before the next track One shot pony. Steve played a lovely Epiphone Semi Acoustic here.

Now this Trio are really on form, Annie doing her moves and getting to her knees at the end. “My daughter always worries when I do that move” she says, “perhaps you’re too old?” More laughs; this time of understanding from our more senior attendees. “It’s a fair concern, it really is”. 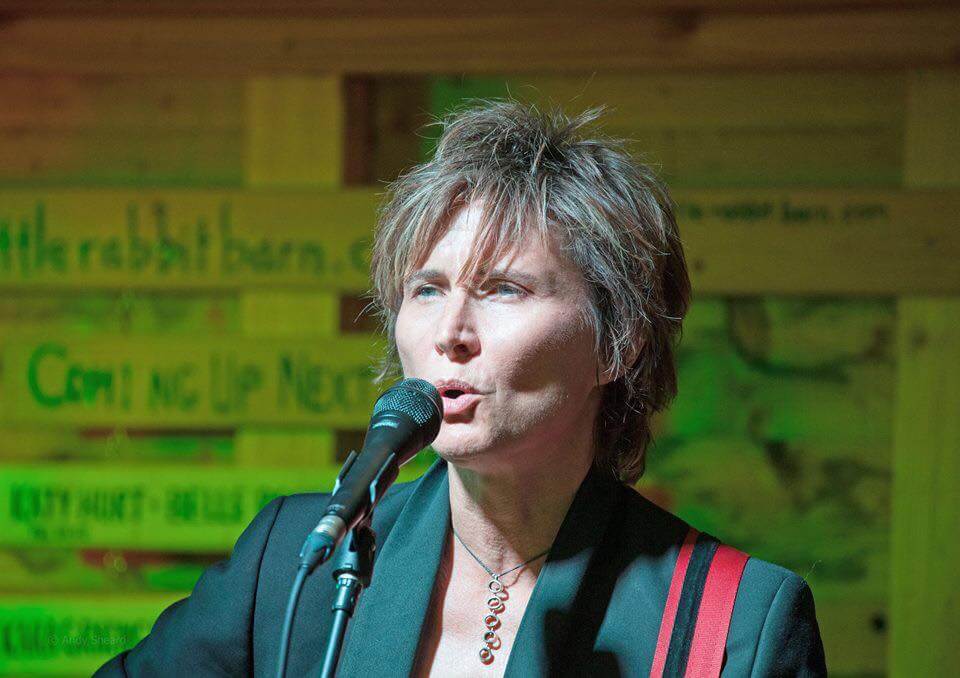 The next song was about learning how to play guitar, the feeling of possibility, the doors are open when you’re young and anything seems possible. It’s called Belmont from the album of the same name. Steve is on acoustic guitar this time.

For the taking, the opening track on the Album BELMONT is about being in the moment you’re in. Something listening to or playing music forces upon you. “This time won’t come again, this time is for the taking”. Is the thought provoking lyric.

Storm warning from FOR KEEPS finds Steve back on electric guitar and some lovely slide playing. “This needs no explanation, it’s about being caught in a storm” says Annie.

Now we had to have an audience vote; do we want Steve on electric guitar or mandolin?

mandolin got the vote by a whisker and Sunny Dirt Road is the song taken from MAKEBELIEVING. The recent hot weather has made this very appropriate with its lazy sunny days. “Leave all our cares behind, no telling what we may find, down this sunny dirt road”. Another great lyric from Annie Keating.

Valentine from BELMONT was next. It’s a love song.

We enjoyed lovely harmonies from Steve and Scott throughout this set as well as their great playing. There is something magical about the sight and sound of a well played double bass in the room.

On the road by 10 was played for Terry Goldsmith. “After gigs it seems like we are always on the road by 10 no matter what, I don’t know why?” Says Annie. It’s a song written out of experience.

“Out until dawn, on the road by 10” is a part of the lyric that says it all. Isn’t it great when music is about something interesting?

After few thank yous from Annie she says “Now you get to sing along” before Steve took over and shamelessly plugged the CDs for sale with a threatening New York Mafia accent. … Big laughs 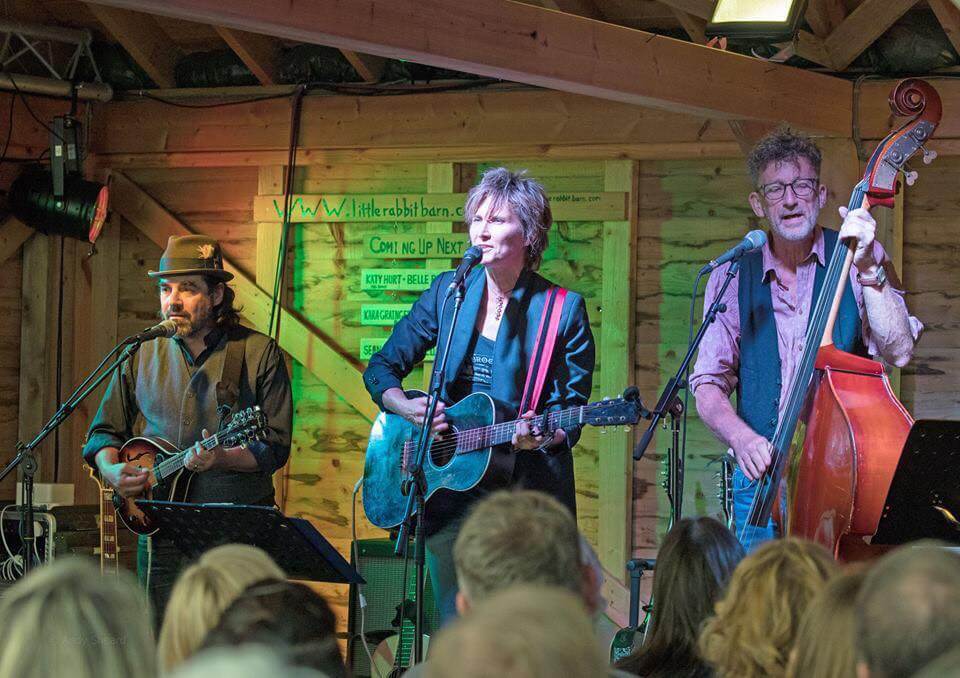 This song is called Lucky from TRICK STAR “because I feel lucky to be here”.

Trouble is a digital download release alongside the TRICK STAR album. This gave us a chance to join in with some finger snapping with Scott. “Some songs come along slowly but this one came quickly in about an hour” says Annie. More great slide guitar from Steve

“This next song You Bring The Sun is about that feeling when somebody turns a light on inside you and it’s a singalong” Annie explains.

To finish we had a classic John Prine song Angel From Montgomery. What a way to end an unforgettable set. Perfect! That was just as good as it gets folks.

The food break passed me in a blur but the taste lingered. It was just what we all needed with time for people to reflect on the great performance we have just enjoyed and to anticipate what’s to come.

Lyn, even on her birthday, managed to excel. The boys at the bar were kept very busy too. No raffle prize for me again though. 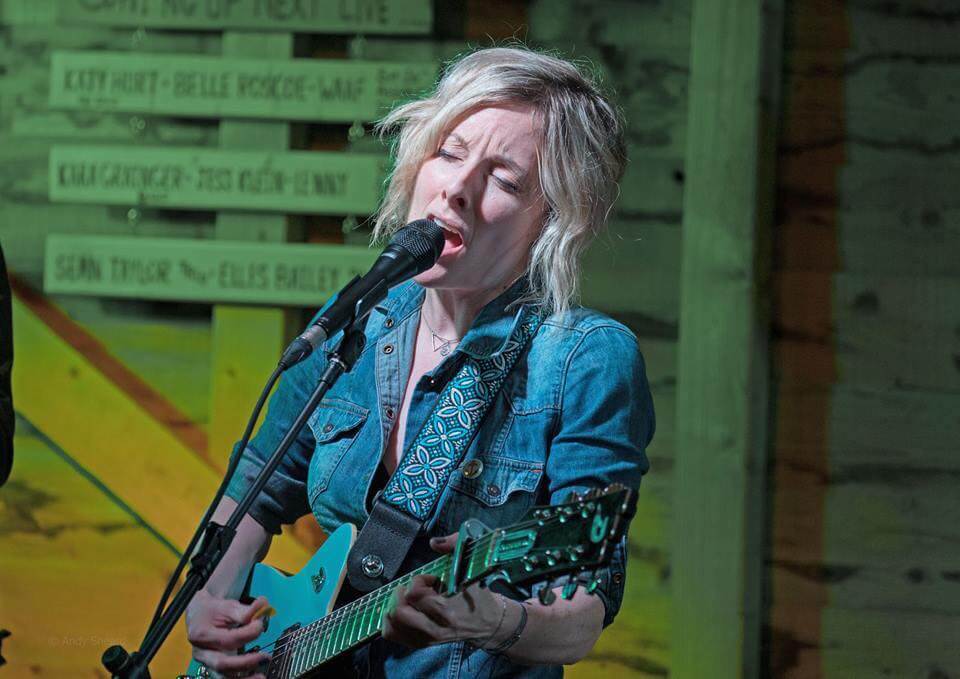 You have got to be good to follow that Annie Keating set with any confidence, although we knew from past experience that Christina Martin and her band were more than up to the task.

I’ve got a gun was the terrific opener. Track three from the IT’LL BE ALRIGHT Album.

Christina on guitar and vocal, Dale Murray on guitars and wow, he can make them sing. With a solid backline of Callum Williams on bass and Justin Johnson on drums.

With a little more vocal monitor It’ll be Alright was next from the album of the same name.

Christina tells us of the three Psychic’s she met whose readings were spot on with her early life experience that inspired this song, You don’t have to leave tonight. Another from the IT’LL BE ALRIGHT Album.

“Are you ready?” she asks “I’m alright too, thanks for asking”…. laughs

“It’s really nice to be invited back. ‘Fantabulous’, that is a real word?” Yes, it is, we all agreed.

Tales from the Psychic’s continued, predicting great things and in 9 months she will fall for a baby boy. “Vasectomy” quipped her husband Dale….. more laughs.

They played a new song next, When the dark meets the light. Brilliant.

“The next one is a love song for a place. As touring musicians, we travel a lot, we meet cool people but we must move on. The good news is we come around and meet them again”.

So, this is a song for Amsterdam, a place she has been to but never had the chance to stay in, Christina tells us. It was dedicated to James in the audience who has been there. She wanted someone to sing it to. Puppet Museum more from IT’LL BE ALRIGHT.

Christina puts her guitar down to play a striking red tambourine as she sings You Ran From Me.

The IT’LL BE ALRIGHT album has been very well represented and so it should be, it’s a great album too.

The next number was Things you can’t tell by looking her way, a song written for her mother to honour her and all she has been through. She hopes we all get to meet her someday.

Now we said goodbye to Callum on bass and Justin on drums although he couldn’t get out from his kit, for a couple of songs with Christina on acoustic guitar.

More chat about the baby idea as they tuned, Dale was not impressed …  we also heard of her early experiences in Austin which inspired the next song.

Once the drum and vocal monitors were turned off to stop feedback we were ready for Marina from the SLEEPING WITH A STRANGER Album. Dale sang great harmonies along with showing what a Duesenberg guitar can do. Magic. 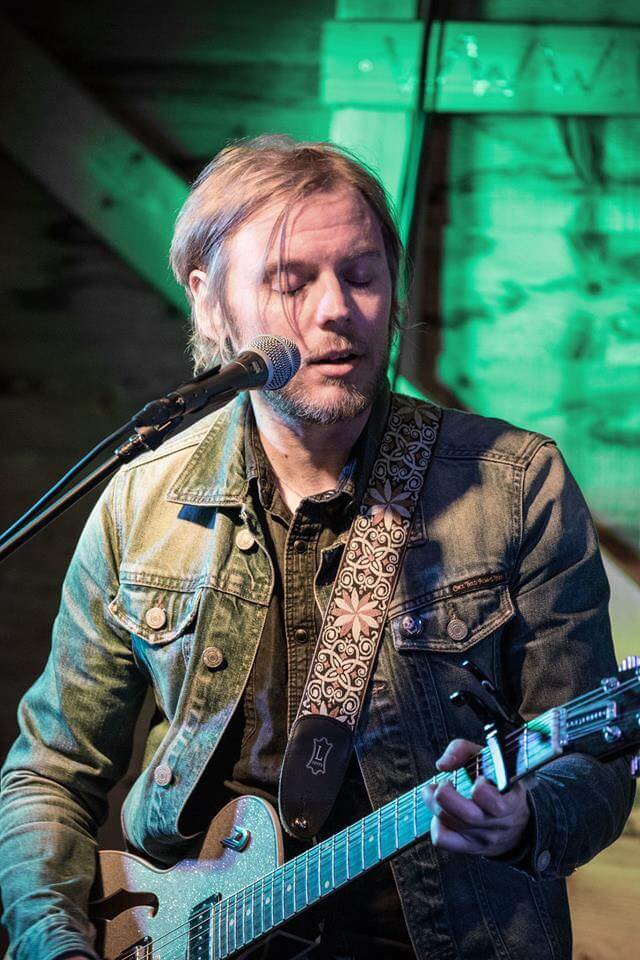 Many artists comment on how polite the LRB audience can be, it seems to come as a surprise that people pay attention to the performance but they appreciate it. This is part of what makes them want to come back.

Take Me Back in A Dream is from IT’LL BE ALRIGHT and was next. They made a music video of it and Christina wants us to watch it and see if we can spot her nipple in it….. laughs

The new video she is making was grant funded but she freely admits it’s quite expensive.

“Things have gone too far and it has to be finished for the grant. An expensive mistake. Maybe the other Nipple will be in the new video. While they are fresh and young I’d like people to see them” she said to big laughs.

Now Annie Keating was invited on stage with Scott Warman and Steve Mayone to join the band.

A new band name is called for here, ‘Christina Martin and Descending Order’.

Scott and Annie were tall on one end, Dale and Steve? not so tall.

They chatted on how Annie met her band and hit it off for three or four shows. Then the thought, why not thirty or forty? “We hoped we would like each other” said Annie.

This was my kind of supergroup, it was great to see so many wonderful musicians on the LRB stage. Fine For A While was the song.

Time for the thank yous. Intros and a happy birthday to Lyn.

“Thanks for inviting us to your home, we destroyed the green room though”.

Justin Johnson on drums from Seattle, Nashville and now here, has been a role model, Christina told us. She only met him this week and was impressed by him and his abilities.

Callum Williams from Liverpool on bass is super pro. So talented, young, single, and hot 23-year-old. She tells us. You can meet him later he has no age limits. More big laughs.

His special nickname is Backseat and we won’t ask how he acquired it.

She thanked Dale for taking his life in his hands with the driving over here among other things like playing great music.

Sleeping with a Stranger was next from the Album of the same name.

J pre-empted an encore call by getting his thank yous in early so we could fit in two more songs before the 11 o’clock curfew.

The last song Lungs are Burning is the new single and a fine way to finish what was a magnificent set.

The release of the new album LUNGS ARE BURNING was delayed due to a health issue but based on this performance I for one can’t wait to hear it.

We have become accustomed to enjoying a fine sound which allows all the artists to shine. Cris and Chris on sound received a tough workout tonight by Christina. Welcome to the premier league. It was terrific experience and one they will look back on.

Editor: Thanks to the wonderful performing artists, Christina Martin, Annie Keating, Nicole Silva, and all the musicians/side players Dale Murray, Steve Mayonne, Scott Warman, Dustin Johnson, Callum Williams, Adam  Churchill,  for such a superb evening. Everyone involved with the production: Cris, Chris, and Chris on sound/video production, Stan and Fran, Brian and Chris, Richard and Sally, Helen and Nigel: Karen and Jennifer for helping on the take-down.  To our guests,  big thanks for supporting live music and hope to see everyone for the fabulous KATY HURT with FULL BAND | BELLE ROSCOE | WAAF aka JAKOB DEIST | on SATURDAY 26 AUGUST

Special Note: It is a huge privilege to host this quality of artists at LRB and over the last two evenings we have received some amazing comments from Annie Keating, Christina Martin,  Stuart and Hilary The Flyin’ A’s, Rebecca Rosewell The Rosellys. It is so flattering to receive their appreciation and support. Really does feel special to be likened to an ‘oasis’ among many other wonderful words. Thank you and we won’t take it for granted or become complacent.

Thanks to our wonderful guests for supporting these artists!