Nothing prepares you for the sight of so many flight cases on the lawn, and it means The Courtney Marie Andrews road show has arrived at Little Rabbit Barn to play the fastest filling gig we have ever hosted. 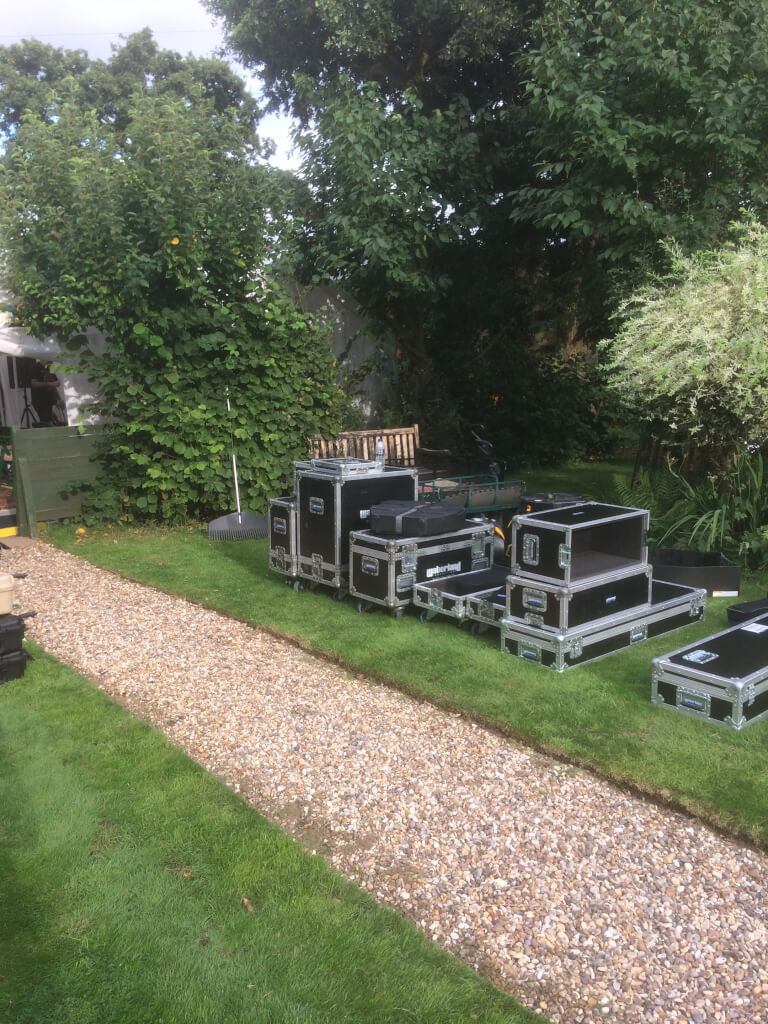 People came to the show from as far as Ireland, whilst others in our local town finally found us on their doorstep and had a first time experience of what LRB is about.

There were plenty more people in between and either way, I can tell you this; nobody left disappointed… certainly not by the performances; the food; or their trips to the well signposted Little Rabbit Bar… HaHa

So, first up to open the show we welcomed, from Brooklyn NY, Robin Irene Moss singing her non romantic love songs. 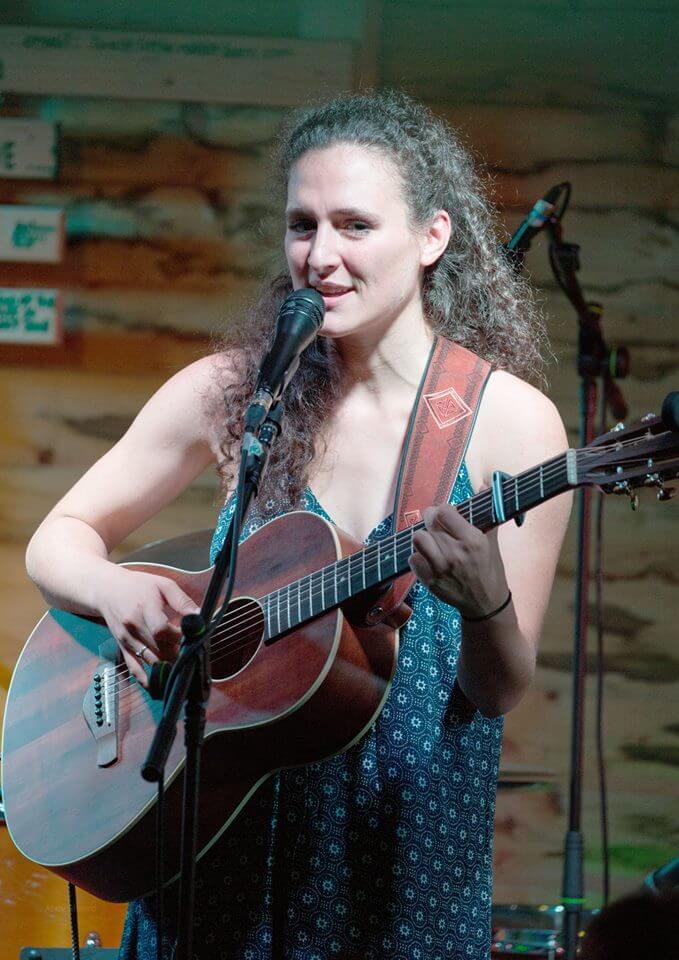 The first love song is for her mum, That’s Not To Say, followed by a love song for Brooklyn, Light in Brooklyn.

Robin says, “Part of the reason I’m singing love songs that are not about romantic love is because I have just had a bad break up… anyone else?” Laughs…

“We’re all single” calls out someone from the audience to more laughs as we hear the next song, I’m The Only One To Blame, telling us all about the situation.

“A few weeks later I found out about the other woman,” says Robin Irene “so I wasn’t to blame after all.” laughs… Well, she did get a song out of it.

“So with the recent presidential election I wrote this next song.” Jeers from the crowd were apparently the right reaction, More laughs… we all seem to be on the same page…

The next song, Miss you, is about missing someone, a gentle reflective tune followed by a song describing a letter Robin wrote to her future hopes and past, Butterflies.

“So this is dedicated to every man who told me to smile” Robin says to laughs… Smile.

Wings Of Wire, the title track from the new single follows.

“I’m really excited to be on the bill with Courtney Marie Andrews and have been listening to her album on repeat. This has inspired a new song which I will try out now”. It’s about how hard it is to love siblings, laughs… We are all friends here and if it goes wrong?” more laughs… I Love You Just The Same.

“I’m glad I got through that one”, says Robin looking relieved. 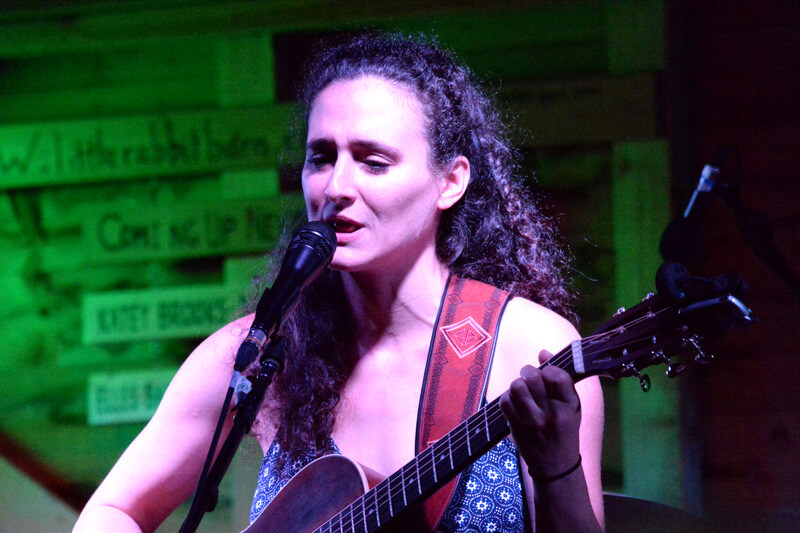 “This next song is about mistakes I have made.” Hindsight, and all too soon it’s time for the last song, a sing-along, and so the LRB crowd were suitably rehearsed…

It was a treat for the ears as we all sang in harmony to Robin Irene’ s delicate guitar.

If You come to LRB, be ready as you could be in the band.

That was a delightful start to the evening with a quirky set of songs and lyrics that quietly draw you in to their stories. A sideways look at life… Thank you Robin Irene Moss.

Now is the time for the legendary food interval (Thanks to Lyn and her team) and underwear adjustment period. Followed, as is the tradition, by the Raffle. I witnessed one guest buy a very last second ticket only to win a bottle of something nice… “Is it too late to buy a ticket?” he had asked. “They would let you have one after the Raffle is over” I jokingly replied. It was a good choice. 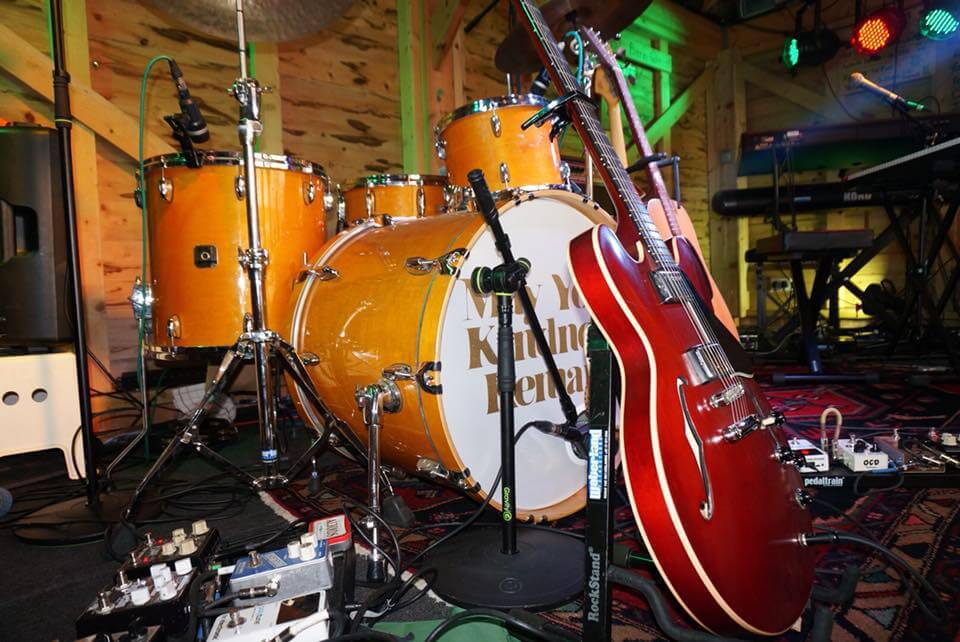 Courtney Marie Andrews takes the stage with acoustic guitar supported by her great band opening with some lovely slide guitar from Dillon Warnek to gently ease us into Long Road Back To You. Track 10 from MAY YOUR KINDNESS REMAIN.

How Quickly Your Heart Mends is next with a nice keyboard break from Greg Diarra and more great guitar from Dillon. Track 4 from HONEST LIFE. 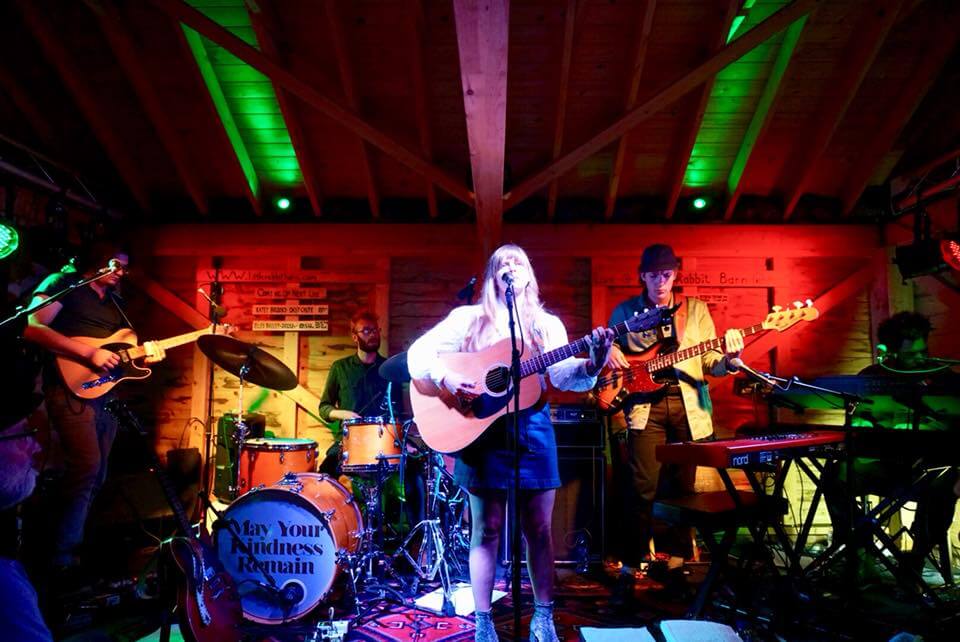 The applause says it all…

Two Cold Nights In Buffalo. Track 3 from MAY YOUR KINDNESS REMAIN quickly follows, the band playing perfectly for the room as demonstrated by the great drumming from William Mapp, never overpowering things.

“This is a sarcastic love song” Courtney tells us with, I’ve Hurt Worse. Track 9 from MAY YOUR KINDNESS REMAIN. 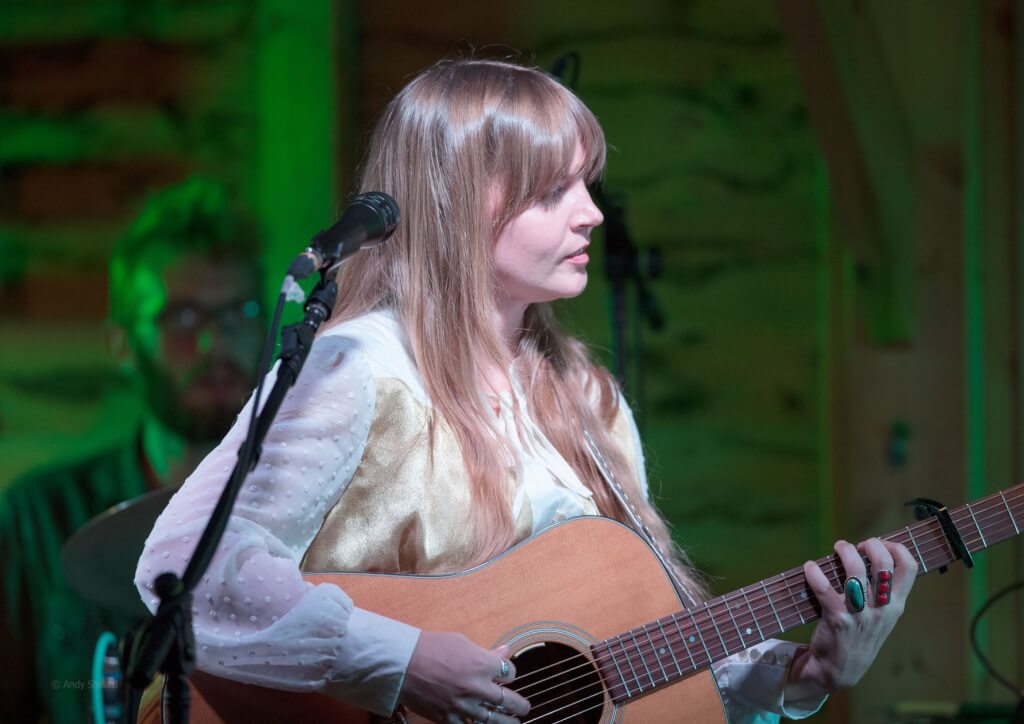 “It’s been two years to the day from the release of my record HONEST LIFE” Courtney tells us, “I’m lucky to still be playing and on the road, so thanks for coming out tonight”.

I think we were the lucky ones to have her play for us on such an auspicious anniversary.

“I’d like to play you a song from that record now”. Table For One. Track 7 from HONEST LIFE.

Now Courtney plays closely with her bass player as they ease into her 2017 single, Near You.

That was great, two laid back songs that built to an exciting climax as the applause rings out after a further lovely guitar solo. These guys know all about light and shade in a performance.

Rough Around The Edges continues the theme, Track 4 from MAY YOUR KINDNESS REMAIN.

Understatement is the name of the game here, less is more. Music that makes the hairs on the back of your neck stand up. The famous LRB pin-drop moments…

Courtney now moves to the piano for This House written after staying at a friends house with plenty of cats and too many panties on the floor. “It’s the kind of place I grew up in and like. It’s not about the house but the people that are in it”. Track 7 from 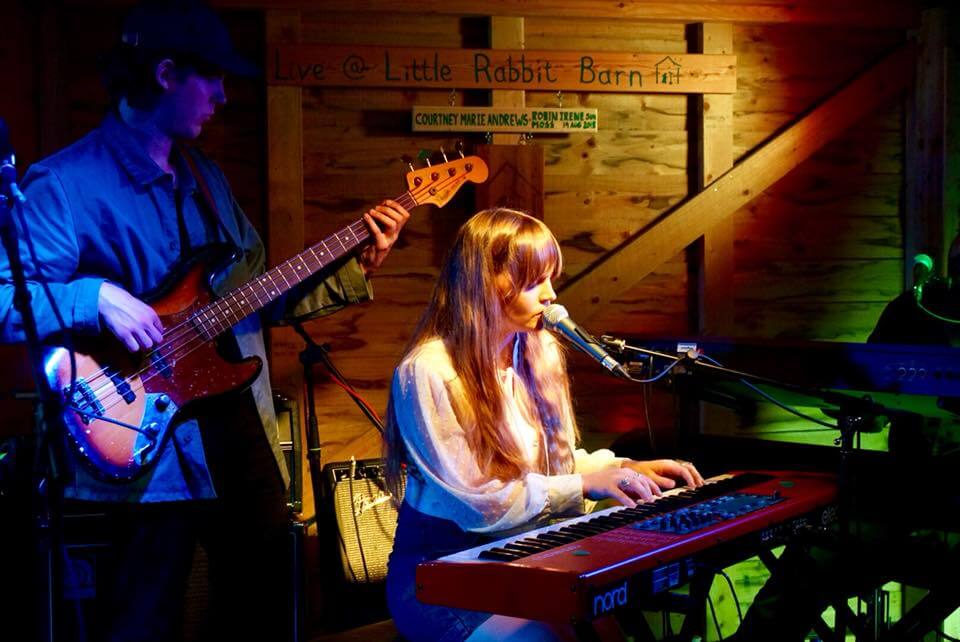 MAY YOUR KINDNESS REMAIN.

Staying at the piano the tempo lifts for Kindness Of Strangers Track 8 from MAY YOUR KINDNESS REMAIN an easy flowing sing along that sticks in your brain. 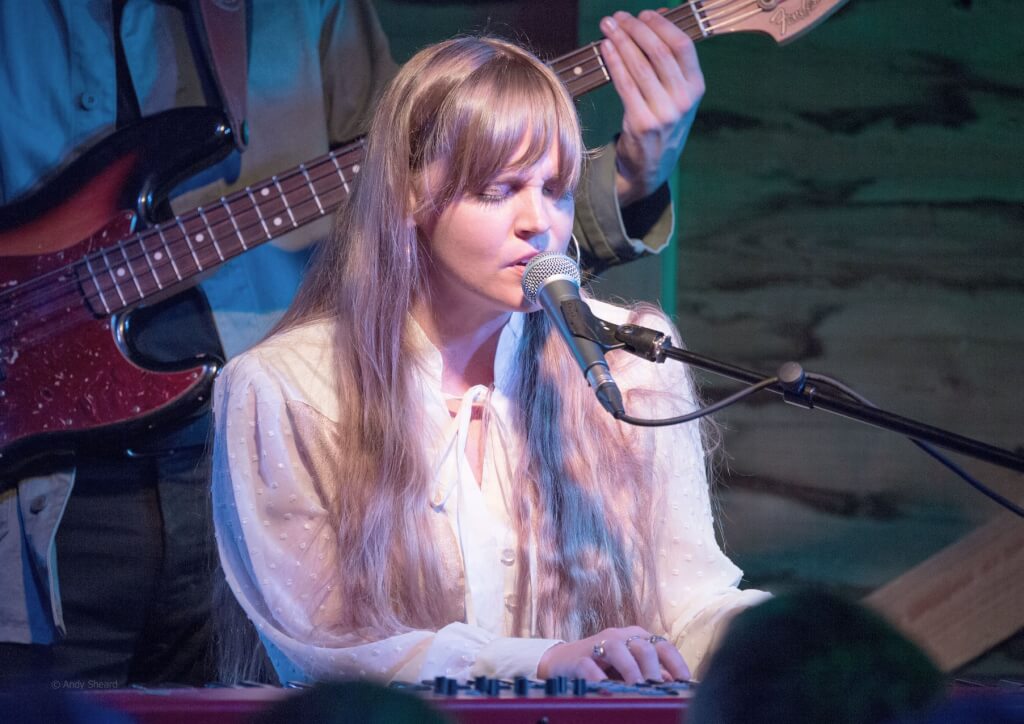 “Now we have a new song for you, is that ok?” Courtney asks. “Second time playing this live, no pressure”… laughs…  This is called Guilty.

Another great song that will be on the next album I hope, it sure is a privilege to hear it first at Little Rabbit Barn. 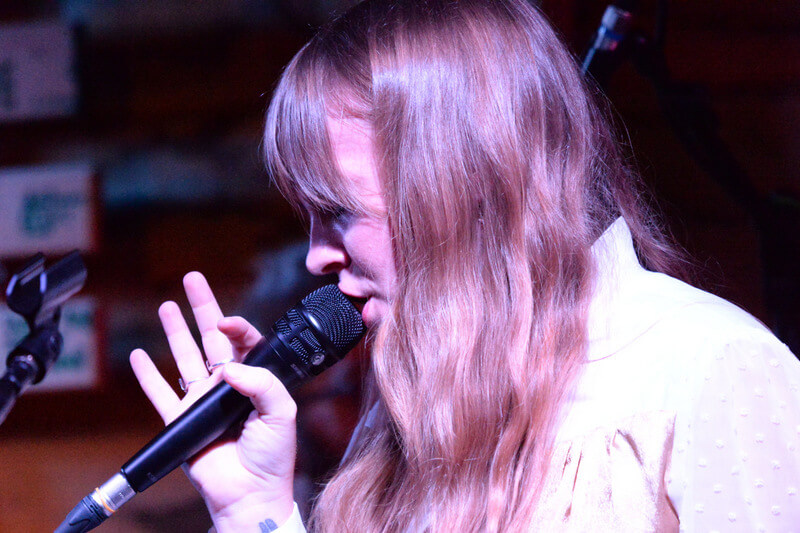 Courtney picks up her gorgeous looking red Gibson 335 now and comments on “Some crazy shit going down in the US right now and how children have been separated from their parents and imprisoned”. “This is for the ACLU who campaign to change things”. 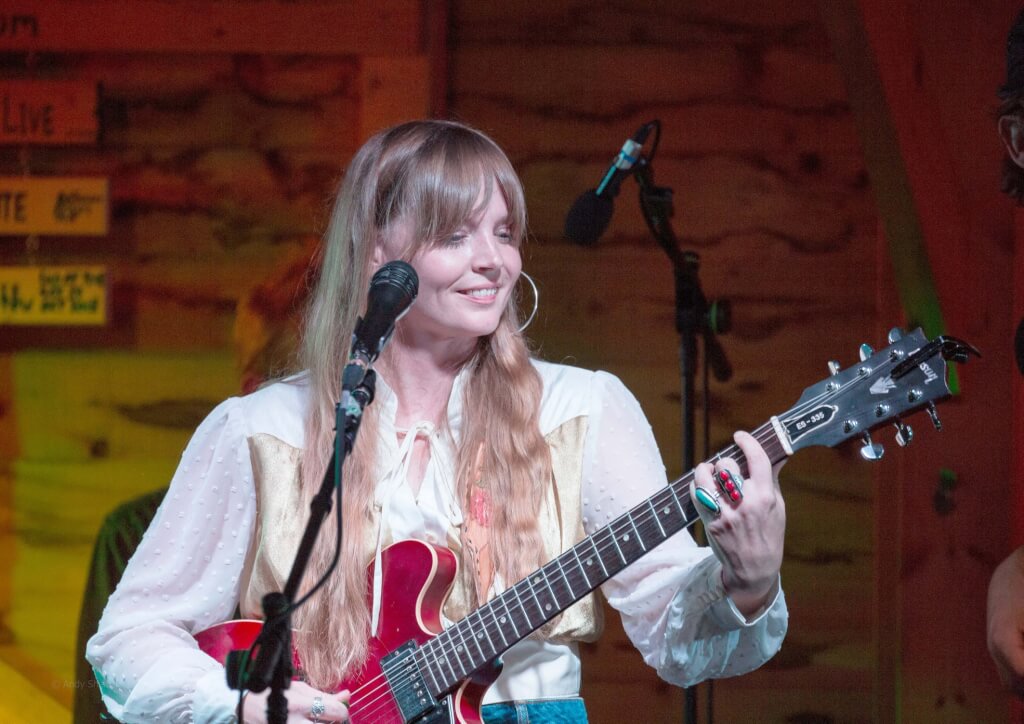 Border Town Track 5 from MAY YOUR KINDNESS REMAIN. The song ends with a hauntingly mesmerising trippy jam session, a session with a message it seems… superb…

Set It Free is next, a slow rocker featuring the 335 once more before Courtney performs guitar free dancing on the LRB stage to Sea Town, another 2017 single release.

After thanking the audience for their attentive listening Courtney introduces her tribute to the late great Aretha Franklin telling us about how she inspired her to sing. Chain Of Fools an Aretha classic and wow did she do it justice along with the whole band. 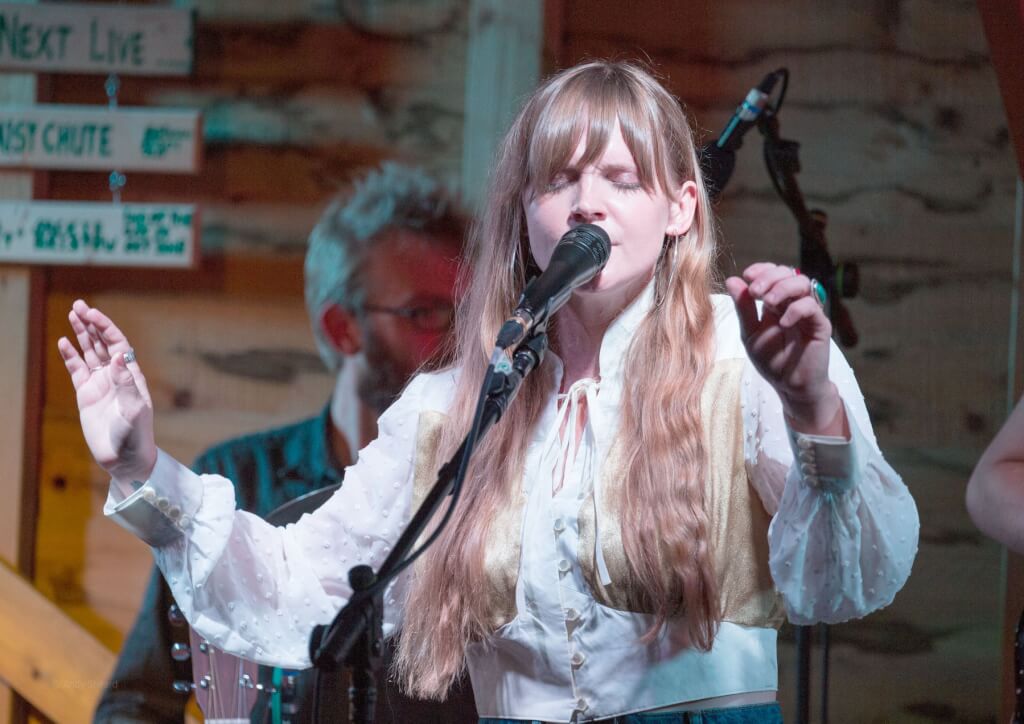 May Your Kindness Remain is a standout performance at any Courtney Marie Andrews concert.

Tonight she left the stage getting as close to the audience (and cameras) as possible putting her heart and soul into delivering the song. A fine message to end with… but we wanted more, everyone on their feet applauding wildly.

J managed to get in some thank Yous before the band could cool down and Courtney returned for an encore, this time, solo and acoustic guitar.

“It’s nice to break the routine of large shows” she says. “Where the hell is this place anyway?” Laughs… We are not at the end of the world but you can see it from here…

It Must Be (Someone Else’s Fault). Lovely.

The band come back on stage and are introduced at this point. it’s the bass player from Norway’s first week on tour, he is doing good on tonight’s showing. 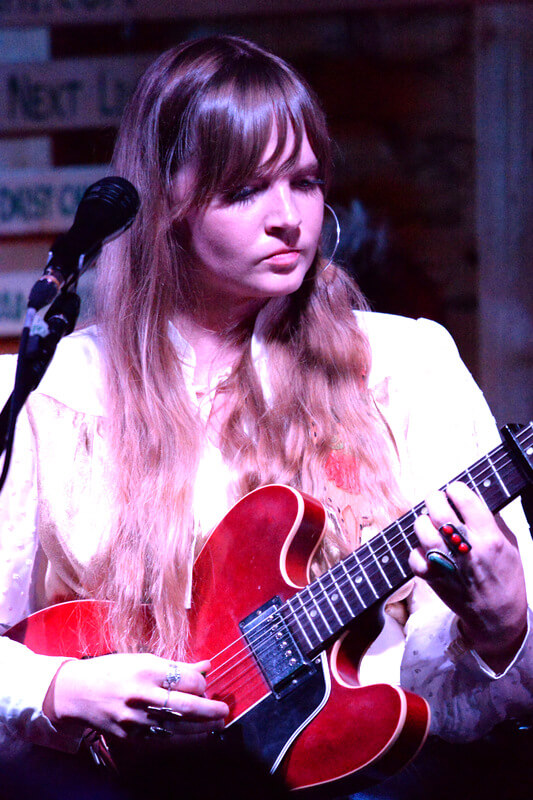 That was something we at LRB will remember for a long long time. The feedback has been wonderful as you can see from the quote below, and it’s great to know people appreciate such fine artists.

Quote…A humble thank you for providing so much outstanding entertainment in such intimate surroundings. In the case of last night’s CMA’s concert, unequivocally the finest ‘Fringe’ to grace the LRB stage!

Genuinely,  ‘THANK YOU FOR THE MUSIC’.

Editor: why thank you kindly, so good to know the music is reaching out.

Editor: Thanks to the wonderful performing artists, COURTNEY MARIE ANDREWS, ROBIN IRENE MOSS, and a big shout to the superb side musicians, Dillon Warnek on electric guitar, Greg Diarra keyboards, and Willian Mapp on drums. Everyone involved with the production:   Thomas Fairbairn engineer; The fabulous little rabbit team of Chris Kyan on video cameras and setup, Stan and Fran guest list and artist merchandise, Richard and Brian running Little Rabbit Ba, Sally and Chris raffle, Helen, Nigel, Karen.
Big shout to Chris for helping Lyn with food on the evening.

To our guests,  big thanks for supporting live music and hope to see y’all next time.
Saturday 22 September we are thrilled to host and welcome KATEY BROOKS and DAISY CHUTE

A special thank you to Chris for a very generous personal donation towards the artist fee for Courtney Marie Andrews. We are all extremely grateful to Chris.

Jonathan and Lyn, Terry and all at LRB